With our WebRTC softphone client, bring powerful unified communications to your mobile phones. Get auto-provisioning by default and white-labeling as you need.

Experience The Power of WebRTC in Softphone

What does WebRTC do?

WebRTC is a multi-purpose application that allows communication to be directly integrated into content for a richer conversation. 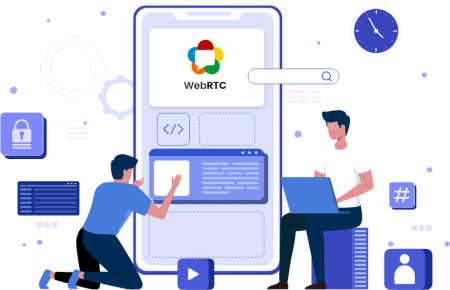 Get bowled over by WebRTC’s most impressive feature: Stream real-time video across browsers without requiring plugins or downloads.

Want to know if the WebRTC user or WebRTC SIP softphone client you’re calling is online and available to accept your call? Tap Presence to find out.

Provide unsolicited notifications for incoming connection requests. Make them available even if the softphone client app is not running, and irrespective of network environment.

Configure your WebRTC phone with predefined settings and give your solution a security edge, by minimizing the risk of information leakage.

Log into the power of the cloud. Manage your softclient configurations via a web portal. Use cloud to deliver services, without any additional infrastructure.

Tragofone’s Push Call Server comprises WebRTC Gateway and converts the WebRTC signals into SIP and vice versa. Make Tragofone your preferred WebRTC softphone client for your business communication. With its inbuilt SIP WebRTC gateway and disruptive communication capabilities, Tragofone is empowering workforces. So now, no more SIP to WebRTC or WebRTC to SIP.

Our WebRTC Softphone Client is Compatible with,

What is a WebRTC softphone?

WebRTC can be seen as an extension of VoIP, bringing the capabilities of making phone calls, video calls, text chat, and even Peer 2 Peer file transfers, directly through your web browser or mobile apps. WebRTC is a JavaScript API developed with the purpose of establishing communication functionality directly in your web browser without the need for downloading any plugins or clients. With WebRTC you can make phone or video calls straight from your web browser without having to load any plug-ins, or download a stand-alone softphone or web conferencing app.

WebRTC works on all popular mobile devices, and on the most widely used web browsers like Mozilla Firefox, Google Chrome, and Opera. With WebRTC, it’s possible to build your own communication apps or platforms or embed them directly into your webpage. With WebRTC you can open up a web page and start a video chat without downloading any plugins.

What is WebRTC used for?

WebRTC can be considered an extension of VoIP that brings the potential of making phone and video calls, chats, and Peer 2 Peer file transfers directly to the web browser or mobile app. WebRTC allows for more widespread adoption of VoIP, acting as an extension for VoIP into new platforms.

Using WebRTC solutions, Tragofone works on any WebRTC-supported browser. This reduces the dependency on hardware or operating systems. This eliminates the costs associated with VoIP calling. You don’t have to plug your Tragofone into the network, provision them for VoIP or fix them when something malfunctions. Browser-based calling also reduces security risks for enterprises.

Why are technology giants rushing to adopt webRTC?

Nowadays, WebRTC application development is a much talked about and innovative topic. Why is it catching the attention of big companies?

–        It supports multiple platforms and devices.

–        Adapts well with your network conditions.

–        There is interoperability with voice and video systems.

–  No specific knowledge of WebRTC technology is required as it provides standardized APIs.

What are the differences between a generic versus a White Label WebRTC softphone application?

A White Label bundle comes with a completely rebranded application, where our developers provide updates and support under your brand and corporate identity.

The generic version will only show your brand after you have completed initial provisioning. You can easily upgrade or downgrade between the different bundles.

What is a Cloud WebRTC phone?

How does Webrtc help in VoIP calling?

VoIP telephony based on the browser removes the need for physical and softphone equipment altogether. Compared to other VoIP devices, this solution has several advantages – both hardware and software.

A browser-based solution using WebRTC is an even more elegant solution. For web-based calling, it doesn’t matter what hardware or operating system you are using. The solution will operate in any WebRTC-supporting browser. There is no need to bother with updates either.

What do I need to setup a WebRTC audio video calling service on my website?

To set-up a WebRTC audio- video calling service on your website, you must hire a professional WebRTC application company that will provide you the requested solution.

What protocol does WebRTC use?

WebRTC uses the Session Description Protocol (SDP) to describe the parameters of peer-to-peer connections. SDP does not deliver any media itself. Instead, it is used to describe the “session profile,” which represents a list of properties of the connection – that is the types of media to be exchanged (audio, video, and application data), network transports, used codecs, and their settings, bandwidth information, and other metadata.

SDP is a simple text-based protocol for describing the properties of the intended session. It provides a description of the acquired audio stream. WebRTC applications do not have to deal with SDP directly. The JavaScript Session Establishment Protocol (JSEP) abstracts all the inner workings of SDP behind a few simple method calls on the RTCPeerConnection object.

What are the major components in WebRTC?

If you wanted to build something that allowed for voice or video calling a few years ago, you would have used C/C++. This would involve long development cycles and high development costs. WebRTC changes all that – it replaces C/C++ with a Javascript API.

There are 3 primary components of the WebRTC API:

–        Media Stream: It acquires audio and video by accessing your device camera and microphone.

These APIs allow browsers to use and send audio, video, and data to other browsers or endpoints.

WebRTC is probably the most secure VoIP protocol out there. However, the open-source nature of WebRTC is a common reason for concern about security and leaks. However, end-to-end WebRTC encryption is totally possible. In fact, there are multiple layers of WebRTC security.

While WebRTC is secure for end-users, it is more complicated for developers. Even if a WebRTC connection bypasses the end user’s VPN, firewall, or NAT, the data is still encrypted by the WebRTC protocol layer encryption.

For developers, this means that WebRTC can be secured. But it adds a compliance consideration since even unintentionally creating unencrypted WebRTC sessions is a violation of the IETF standards.

WebRTC is completely free. WebRTC is an open-source solution that was built by Google in 2011. It allows peer-to-peer communication in web browsers and mobile applications through the use of application programming interfaces (APIs). This includes audio, video, and data transfers.

Although WebRTC is embedded in browsers, you can take and adapt it for your own needs. This in turn has created a vibrant and dynamic ecosystem around WebRTC of a variety of open-source projects and frameworks as well as commercial offerings from companies that help you to build your products.

Can WebRTC be hacked?

Hackers abound on the internet. However, WebRTC has a few inherent architectural advantages that make it difficult for hackers to break into:

–        Peer to Peer (P2P):  After the Peer Connection has been established, all video, audio, and data traffic over WebRTC are sent directly from one peer to another. This means there is no intermediary server in which the conversation can be hacked. This is inherently more secure than any application that uses a media server in the middle. Any P2P WebRTC call cannot be listened to by a third party.

–        Encrypted:  WebRTC encrypts all data while it’s in transit. This means even if someone is watching your network traffic, they will not be able to decrypt the video or audio being sent between two peers and listen in to your conversation.

–        Data Channel:  In addition to video and audio, WebRTC also offers a Data Channel layer with the same Peer-to-Peer encryption. This means your application can use the Data Channel to securely send files between two peers without fear of someone being able to intercept that data.

What is web conferencing?

Web conferencing refers to the collaboration technologies that enable users to place calls via an application over the internet or through software downloaded onto a computer or device. These tools include real-time collaboration solutions like video conferencing, screen share, document sharing, and online meetings.

Web conferencing tools are becoming an integral part of modern organizations. As enterprises seek more cost-effective and collaborative ways of working, web conferencing software is emerging as a key way to help them increase productivity.