Home / Business / What are Push Notifications? Game Changer for Softphone

What are Push Notifications? Game Changer for Softphone

What are Push Notifications? Game Changer for Softphone 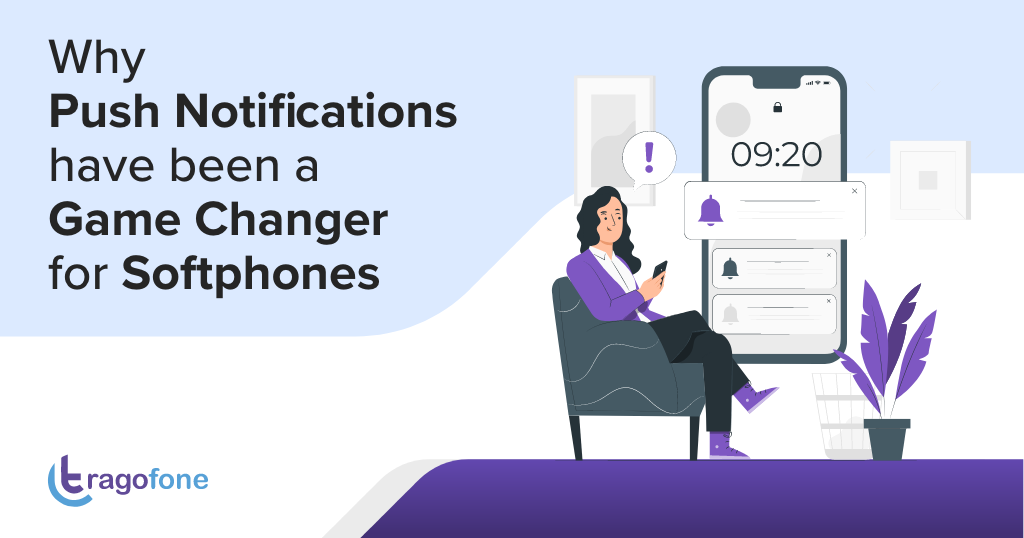 Since 2004 there has been a steady decline in landline usage with most businesses making a shift to ‘softphones’. These numbers will give you a fair idea of how SIP softphones have become popular over the years.

Softphones, as we know them today first, came around in 1995, but the technology has changed multiple folds and for the better. In fact of the path-breaking changes that have happened in softphone technology include features like WebRTC, auto-provisioning, white-labeling, and push notifications for the B2B segment that were introduced for the first time for the B2B segment by select softphone brands like Tragofone.

Among the many good features that modern softphones for business come with ‘push notifications’ has truly been a game-changer. Wondering how? Let’s find out.

What are Push Notifications?

Defined in lay terms, “A push notification is a message that pops as an alert on a mobile device. An app service provider can send the notification to a user anytime, even if the app or device on which the app is installed is not in use.”

A Brief History of Push Notifications

Apple launched Apple Push Notification Service (APNs), the first push service back in June 2009. Google followed soon and released its own service, Google Cloud to Device Messaging (C2DM) in May 2010. In May 2013 Google introduced “rich notifications”. This meant that push notifications now contained images, as well as action buttons. Action buttons enabled users to take immediate action from a notification. Apple added interactive buttons the following year in September 2014. This enabled users to send a response right away to the app publisher.

Push Notifications in the Context of Softphones

Push notifications are a server-to-client message delivery mechanism where a message is sent to an Android application, an iOS application, or a browser-based web application in order to wake up sleeping or closed applications on incoming SIP calls or messages.

They enable SIP users to stay available in an energy-efficient way, without the app running constantly in the background. The two primary cloud providers for push notification are Apple (Apple Push Notification Service) and Google (Firebase Cloud Messaging).

How have Push Notifications changed the way Softphones work?

When softphones first appeared in the market, they had to maintain a steady network connection with a server in order to receive calls and data. This resulted in frequent device wakes and wasted energy. Using push notifications softphone apps don’t need to run in the foreground, or even background, at all times. Whenever a push notification is received, the app displays an alert, providing an option to accept or reject the call.

Why should your Softphone App not run in the Background 24×7?

When apps run in the background on a mobile phone, they consume processing power and the battery’s energy. When it comes to a VoIP softphone app, this can translate into a huge battery drain, as the app needs to listen to its network for new events, like incoming calls, all the time.

Push notifications help reduce this energy drain by shifting the continuous listening function from the mobile device to the server-side of the network. This allows the VoIP softphone app to run with a minimum of required resources. When a voice call or a text message comes in, the server on the VoIP side of the service sends a notification to the user’s device. The user can then activate the app to accept the voice call or text message.

The main purpose for push notifications in VoIP-enabled mobile dialer apps is to wake up the sleeping or closed SIP applications when a new call or message is received. This boosts availability and reduces battery usage for the device.

As cloud push messaging notifications gain traction in the softphone world, it is becoming a highly recommended tool and will soon become mandatory for mobile operating systems – especially as the latest versions of iOS and Android devices are becoming particular about closing background applications and disconnecting network connections if an app is not in the foreground.

Push notifications are a combination of various elements such as:

When designing push notifications, choose an image that is relevant, visually appealing, and keep the message crisp and to the point.

Android devices show unread messages on the lock screen mode as well. Android does not provide any customization at an OS level and uses a standard banner approach that users cannot change.

Types of Push Notifications in Softphones

Most softphone app push notifications appear in the following format:

How do Push Notifications work in Softphones?

Given below is the step-by-step process of sending push notifications:

Why Push Notifications have been a game-changer for Softphones

Enterprises are increasingly using mobile softphones – instead of traditional phone systems – to meet their employees’ communication needs. While softphones emerged as a complete unified communication solution, one of the major challenges that developers faced in mobile SIP client development is receiving incoming calls while the softphone application is not running.

Until recently many developers resorted to simple tricks to work around the issue – like continuously playing a blank sound stream, or sending keep-alive packets, in order to keep the sockets open while the application running in the background.

VoIP (Voice over Internet Protocol) enabled softphone apps to allow users to make and receive calls by using an internet connection instead of a cellular service. Since the app relies on a data network, making calls usually results in high power consumption.

Softphones need a steady network connection with a server in order to receive calls and other data. This means developers need to write complex code that sends periodic messages back and forth between the app and server to keep the connection alive, even when the app is not in use. This technique resulted in frequent device wakes that resulted in wasted energy. Also, if the user exited the app, they could no longer receive calls from the server.

Push notifications changed the entire dynamics of how softphones, like Tragofone, receive and make calls. Using these notifications the app does not require to be running in the foreground or even in the background at all times. Whenever a push notification is received, the Tragofone app displays an alert, providing an option to the user to accept or reject the call.

2020 made us realize how much we can do on the go. With the changing remote and hybrid work culture, organizations will eventually need a solution that allows their distributed employees to communicate with customers and collaborate with their teams via smartphone apps on iOS and Android. No wonder the softphone market is growing fast.

However, this also means constant pressure on employees to stay connected 24×7. With push notifications, employees get the freedom and flexibility to exit from the app once their office hours are over. Push notifications ensure they do not miss out on important calls and messages even when not using the app. It also ensures extended battery life ensuring that the phone is available to receive calls.

push notifications for softphonesSIPWebRTCwhite labeling
206
Unlike this post
Free Trial